Scram from my kitchen (Tom, Dick and Harry)

SCRAM FROM MY KITCHEN (TOM, DICK AND HARRY)

Twenty four years ago, a comedy by Ray Cooney was first staged in Šabac. It was the most famous comedy of this contemporary British dramatist, actor and director, Run for Your Wife which the play’s director Aleksandar Đorđević renamed Life is Beautiful. What ensued was the production of Out of Order, once again renamed in Šabac into Crazy Night in Hotel Yugoslavia. Both these comedies had many performances, audience loved them, they received awards, won at the Comedy Days Festival in Jagodina, earned Ljubiša Barović the Golden Turkey Award… Casts of these Cooney’s comedies also included Aneta Tomašević, Petar Lazić, Aleksandra Gavanski, Ivan Tomašević, Dušan Stevanović... The dramaturge was Dragana Bošković who, following the director’s vision, adapted these plays to Serbian context, transferred their plots to our country and made their characters Serbian.

From Šabac, Cooney’s comedic gift spread to other Serbian theatres like a wildfire. Ever since, there has hardly been any theatre in Serbia or the region, which has not staged Cooney, often in their Serbian versions originating from Šabac. Cooney is still frequently and gladly staged in Serbia. Many other comedies of his are still performed today (Run from your Brother (One for the Pot). in Kragujevac, Funny Money in Šabac, Caught in the Net and Dial M for Adultery (Move over Mrs Markham) in Kruševac). The Zvezdara Theatre in Belgrade performs their version of Run for Your Wife entitled A Lover of Great Style sometimes even two times a day…

In the Šabac City Theatre, on 24 February, the young generation started their work on staging the latest comedy by Ray and Michael Cooney entitled Scram from My Kitchen (original title Tom, Dick and Harry). This hilarious comedy following the attempts of three brothers Kerwood to navigate countless obstacles for Tom, the eldest, to adopt a baby, and taking in some Kosovar refugees along the way (original British text, unbelievably topical) is directed by the young film, TV and theatre director, Andrea Ada Lazić, whose play “Sentimental Tectonics” has recently been pronounced the best at the First Staging Festival in Aleksinac. This production was her first direction in the Šabac City Theatre, where she grew up, as chance would have it.

The costume designer for this new staging of Cooney’s comedy is Selena Tomašević, while stage designer is Nikola Nikolić. As an homage to the first staging of Ray Cooney’s comedies in our theatre, the young generation is joined by some Cooney veterans - Dragana Bošković (dramaturge) and Petar Pjer Rajković (Stage movement)..

The main roles of the three Kerwood brother in this hilarious vaudeville are played by Vladimir Milojević, Strahinja Barović and Miloš Vojnović, while Mrs Linda Kerwood is played by Sonja Milojević, who was pronounced the best actress at the Aleksinac theatre festival, for her role of Diana in Sentimental Tectonics.

The grandfather and granddaughter from Kosovo, who arrived from Calais to London, only to emigrate further, are played by Ljubiša Barović and Kristina Pajkić. Cooney’s regular character of police constable is played by Ivan Tomašević. Boris, the criminal who sells passports to the Kosovars is played by Petar Lazić. Aneta Tomašević is a social worker, Mrs Potter, who sets the wheels of the plot moving, as she arrives to assess Tom and Linda as potential adopters…

This first staging of the play Scram from My Kitchen (Tom, Dick and Harry) (translated by Andrea Ada Lazić) is an exhilarating vaudeville which, just like other comedies of this famous author, actor and director, does not mock anyone. Everyone and everything will be satisfied in the end. Even the law!

Providing that this premiere of the new Cooney’s play coincides with 10 years of the death of Aleksandar Đorđević, the famous film, TV and theatre director, who in the second phase of his career staged 11 plays in Šabac, and also with the moment of departure of the theatre’s ex-manager Zlatica Popović, who produced Cooney in Šabac and invited Đorđević to direct here, Dragana Bošković, who has served as dramaturge for Cooney’s plays both then and now, will make a publication about Cooney and Đorđević in Šabac, also containing statistical data concerning staging Ray Cooney’s comedies in Serbian theatres.

I have known about Ray Cooney’s comedies since forever. As a young girl, I witnessed in awe the staging of his hilarious vaudevilles Life is Beautiful and, later on, Crazy Night in Hotel Yugoslavia. Aleksandar Đorđević has always been for me Aaron Shapiro, a Hollywood magician who can do anything. When I was five, I begged him to “let me into actors”… Today, I pray to his spirit to make my Cooney comedy similar to his.

I searched in London for the comedy “Tom, Dick and Harry” that Ray Cooney had written with his son Michael. I wanted for us, both real and spiritual children of those who had introduced the perfect comedies of Ray Cooney to our theatre, to stage the first performance of a new play of his. This one is the most topical for us and it is currently performed all over the world.

In these transitional times, Cooney offered us a comedy resembling the BBC’s legendary Only Fools and Horses.

What the brothers would have to do (and prevent from happening) for Tom to carry on the name of Kerwoods, and for Sania and Alyush, emigrants from Kosovo, to find their family in Shepherd Bush, London? You will see through laughter and tears.

Just like all other Cooney’s comedies, Scram from My Kitchen, as a kind of a sequel to all his other “scram-plays” (from wife, husband, brother, aunt…), is painfully topical and surgically accurate.

Words of the dramaturge

In this theatre, for director Aleksandar Đorđević, my teacher and spiritual father, I made Serbian adaptations of two comedies by Ray Cooney, Run for Your Wife and Out of Order (translated by Vlada Gerić) in order to make the characters directly correspond to our mentality. We re-named them Life is Beautiful and Crazy Night in Hotel Yugoslavia. That is Cooney for you, we are all subjects of his farcical genius.

When young director Andrea Ada Lazić agreed with the Šabac City Theatre, in this season when we commemorate ten years of Aleksandar Đorđević’s death, to direct the first staging of the wonderfully topical comedy Tom, Dick and Harry on the “Ljubiša Jovanović” main stage, it turned out that after almost half a century I would once again get the chance to work on an original British vaudeville of the very best of today’s comedy writers.

Everything is the same, yet entirely different. Ray and Michael Cooney (father and son) helped me in this task selflessly: in their uproarious comedy, they introduce the characters of two Kosovar refugees, a grandfather and his granddaughter, looking for their relatives in London. Cooney wrote their lines in Albanian, and our precious Spresa Videnović helped us adopt them as best as we could.

The Circle is closed. Prime ministers and opposition leaders are still targeted by tabloids, just like in Crazy Night, taxi drivers are still serial bigamists and survive improbable traffic accidents, like in Life is Beautiful… At this moment, Albanian population from Kosovo thread their path towards a better life, via Subotice… While many a couple try hard as they might to get an heir. Blood is thicker than water, so brothers creatively (and absurdly) help them. Police, as any other authority, is flexing their muscles…

We agreed to call this vaudeville Scram from my Kitchen, as a reminder of the many Cooney’s comedies that have been performed for half a century now in Serbian theatres with a fantastic success.

Pjer, Aneta, Žuća, Ljubiša, Pera and me (as well as Aca, Zlatica, Zorica and Sajka, who are no longer with us) hand over the baton to younger generations, so that they could continue with our show. Full of cheer and exhilaration, of course. 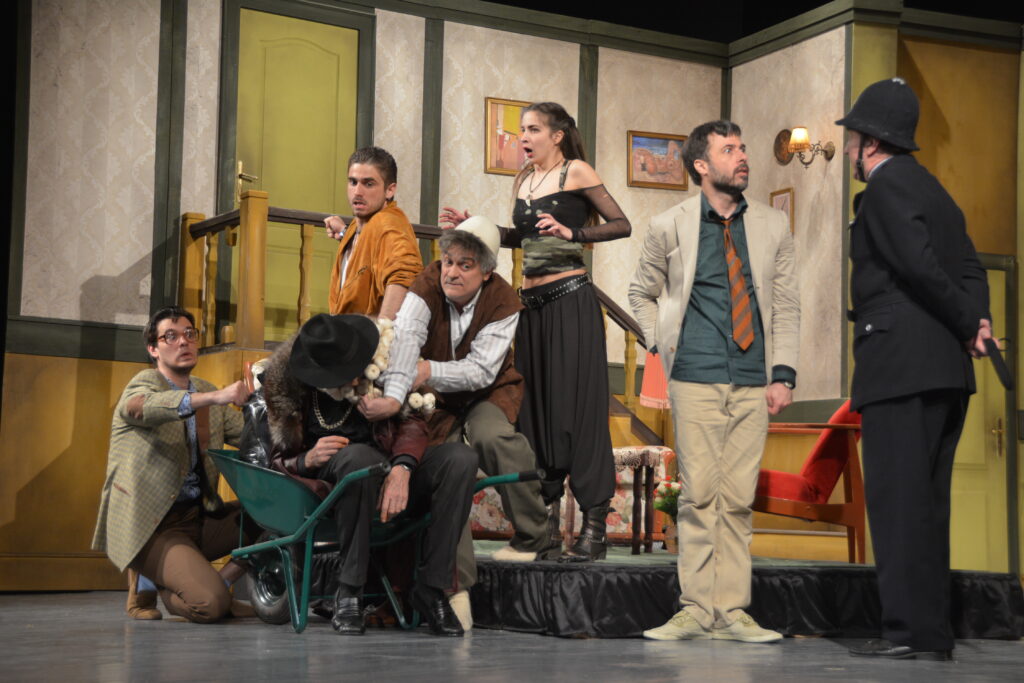 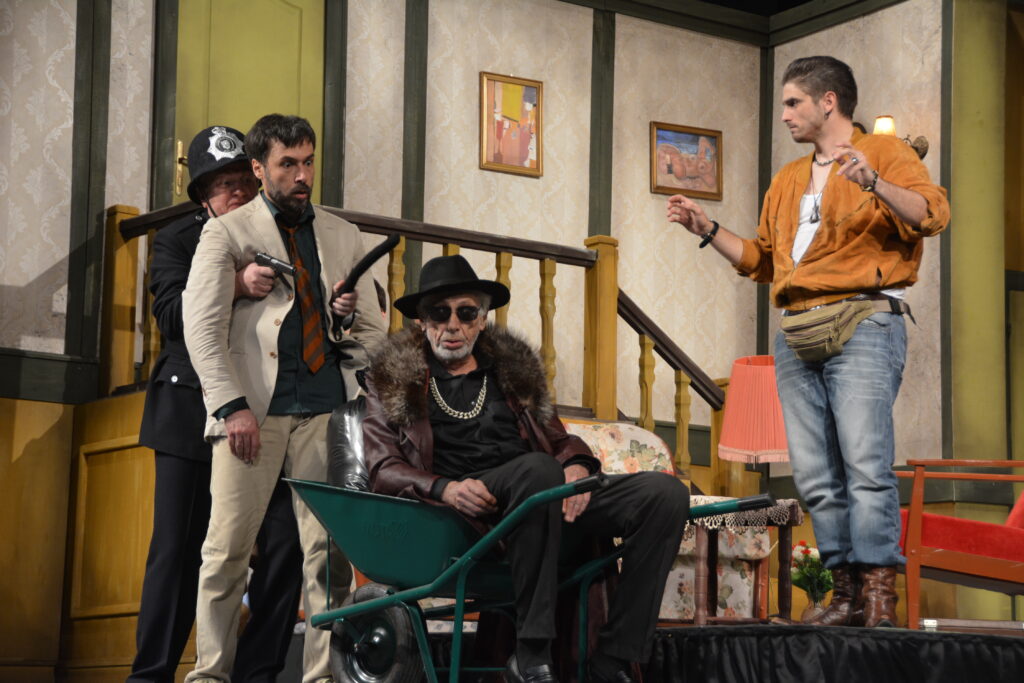 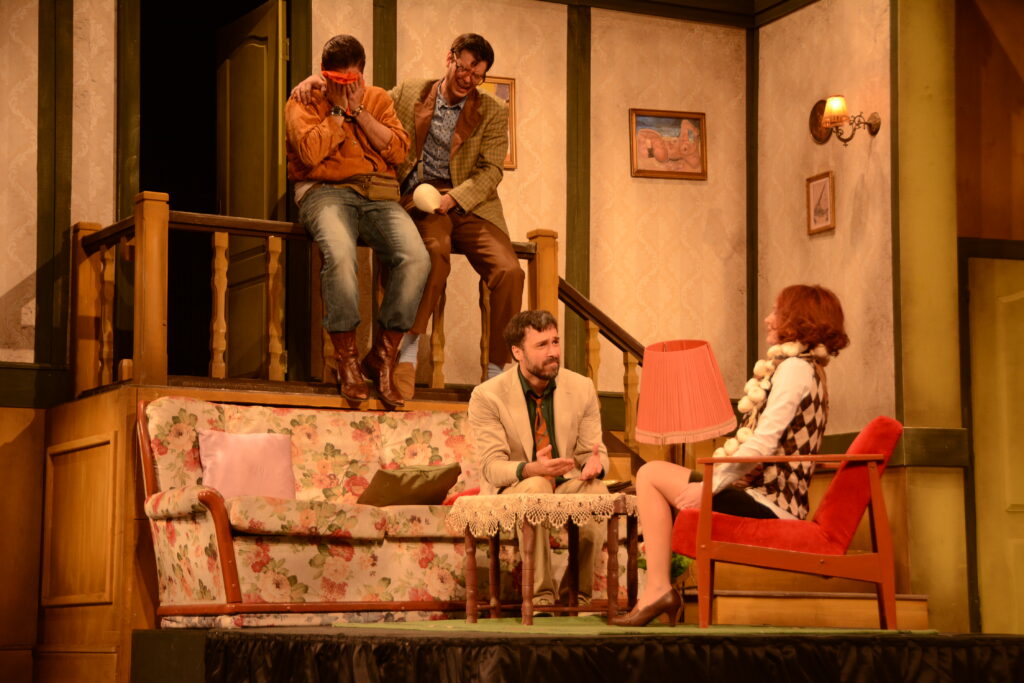 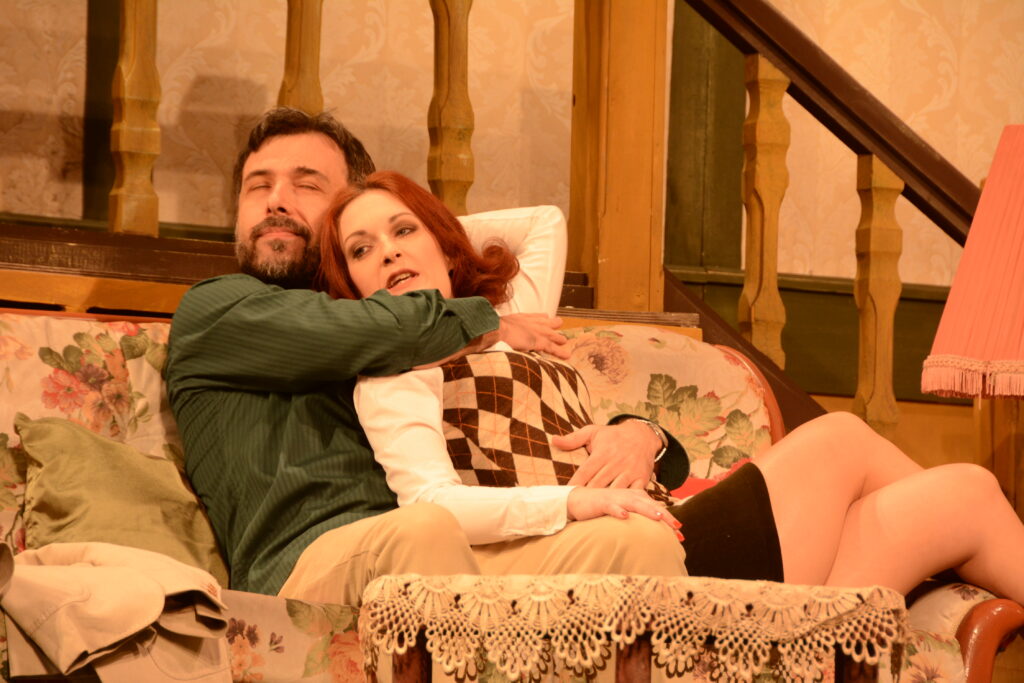 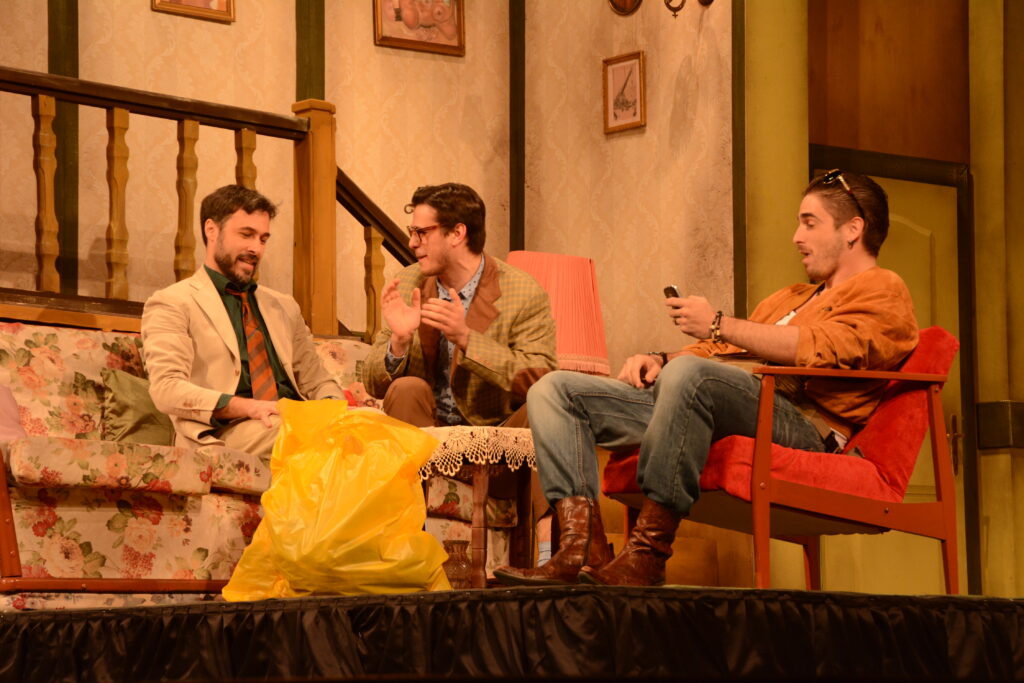 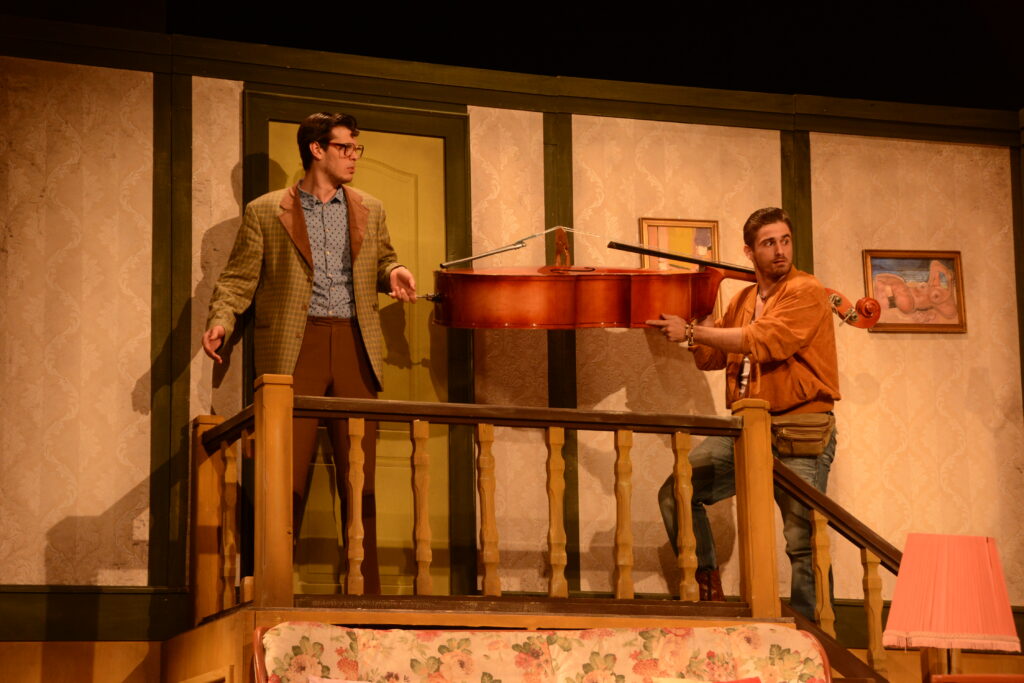 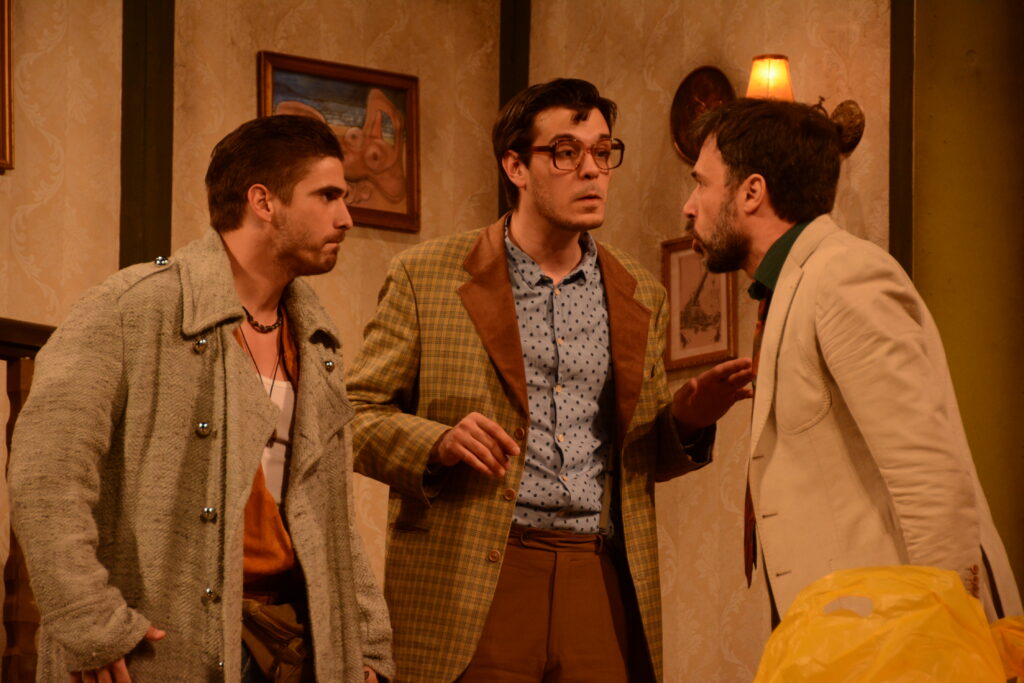 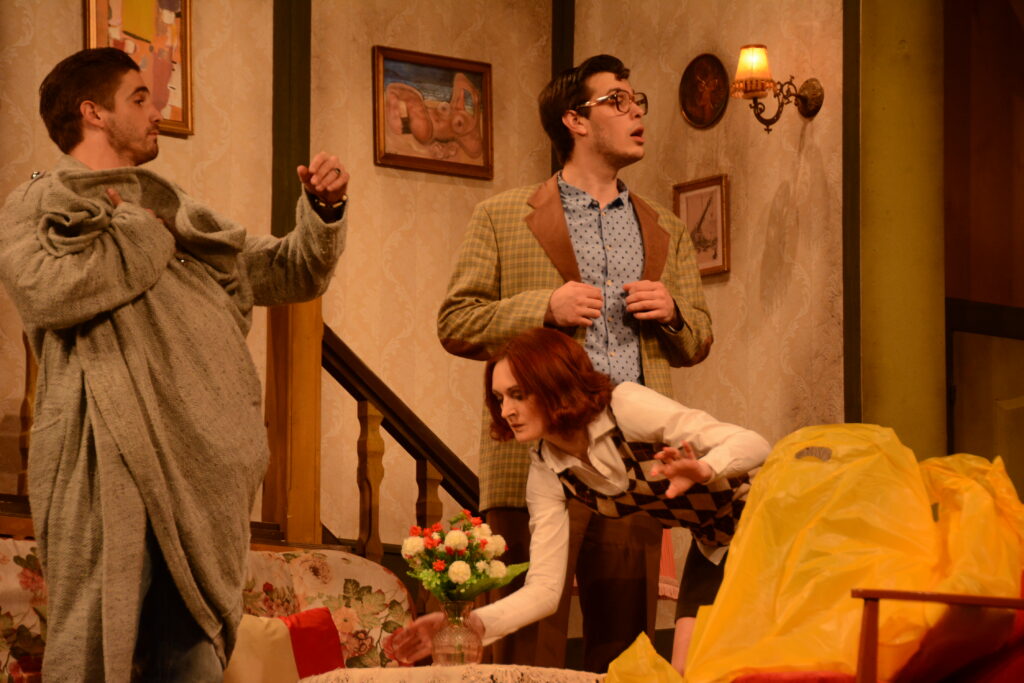 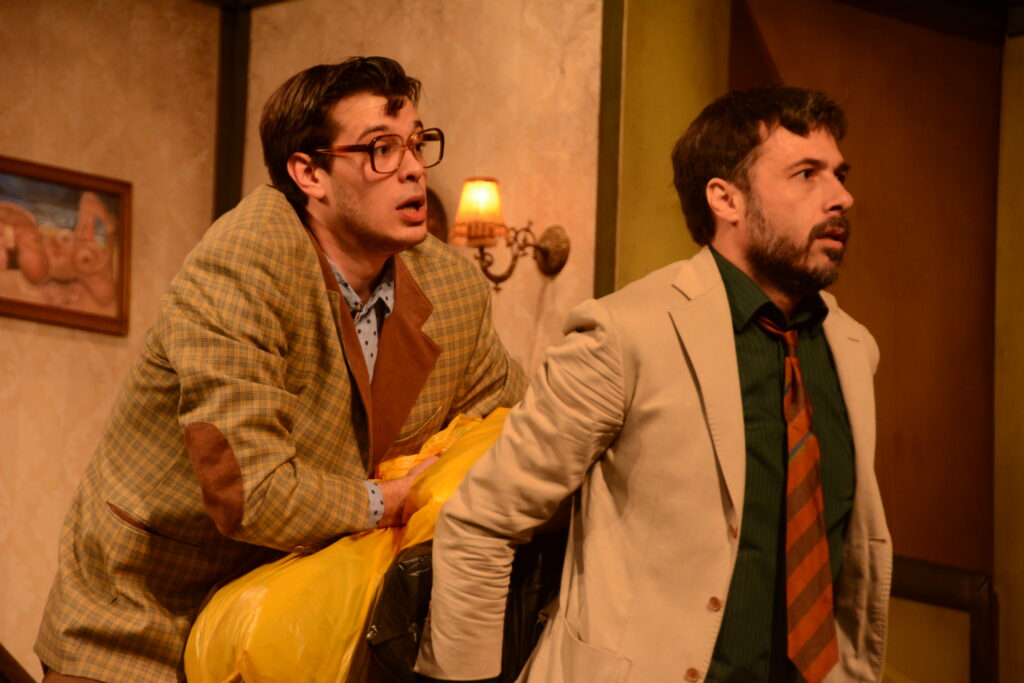 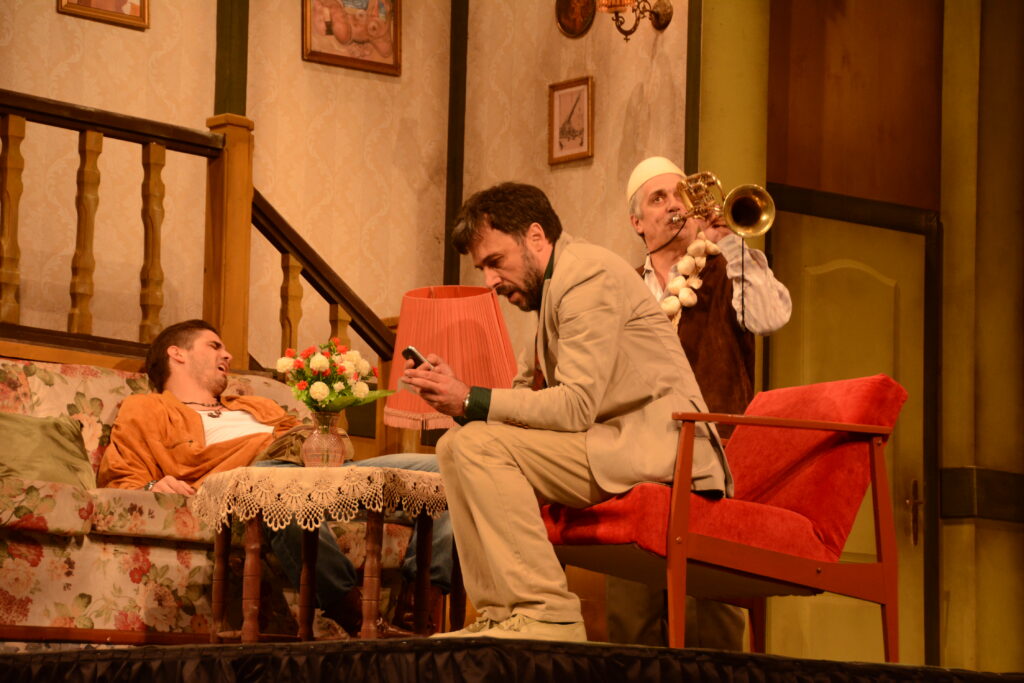 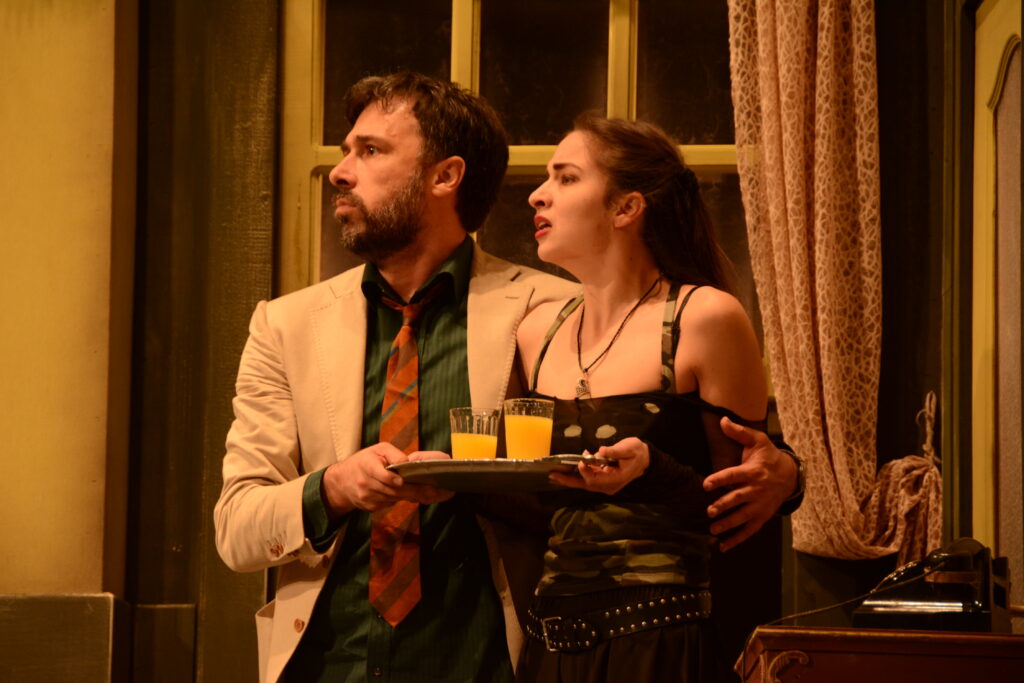 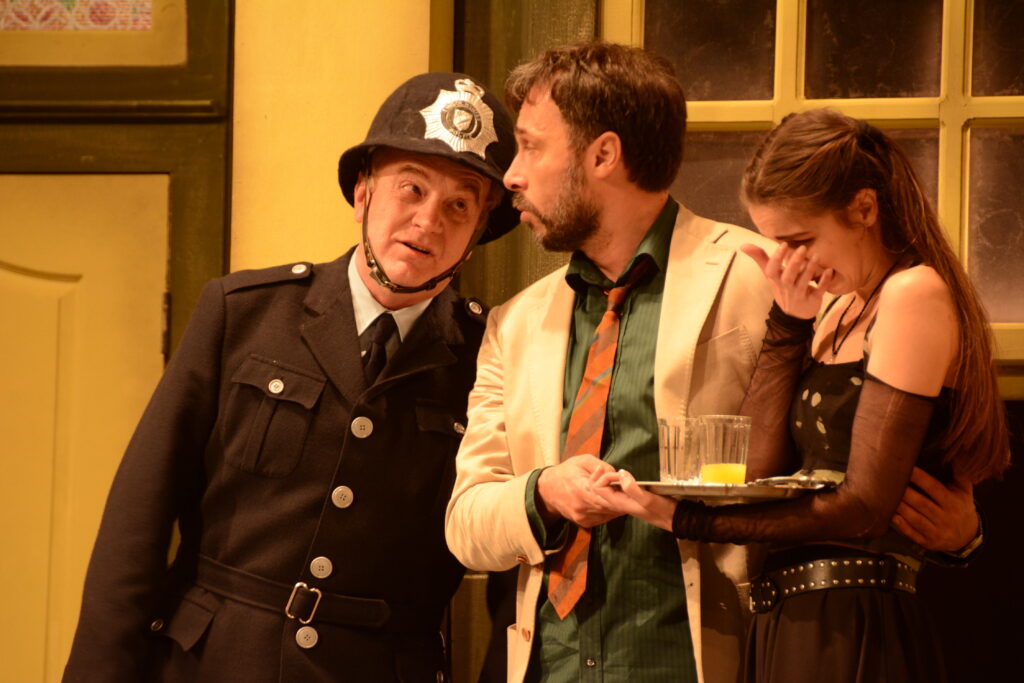 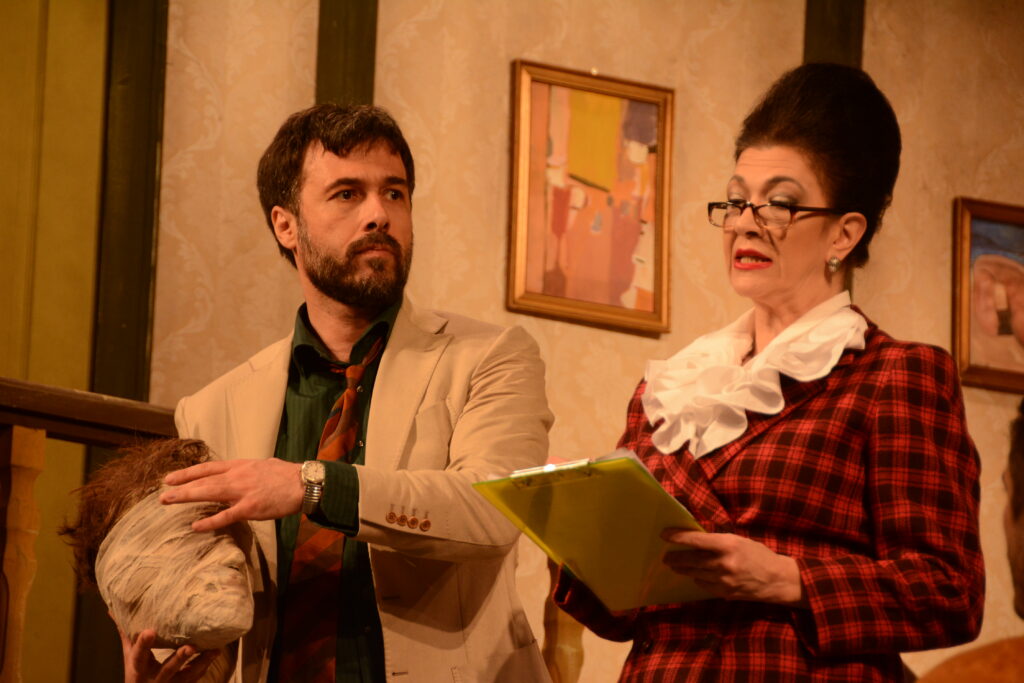 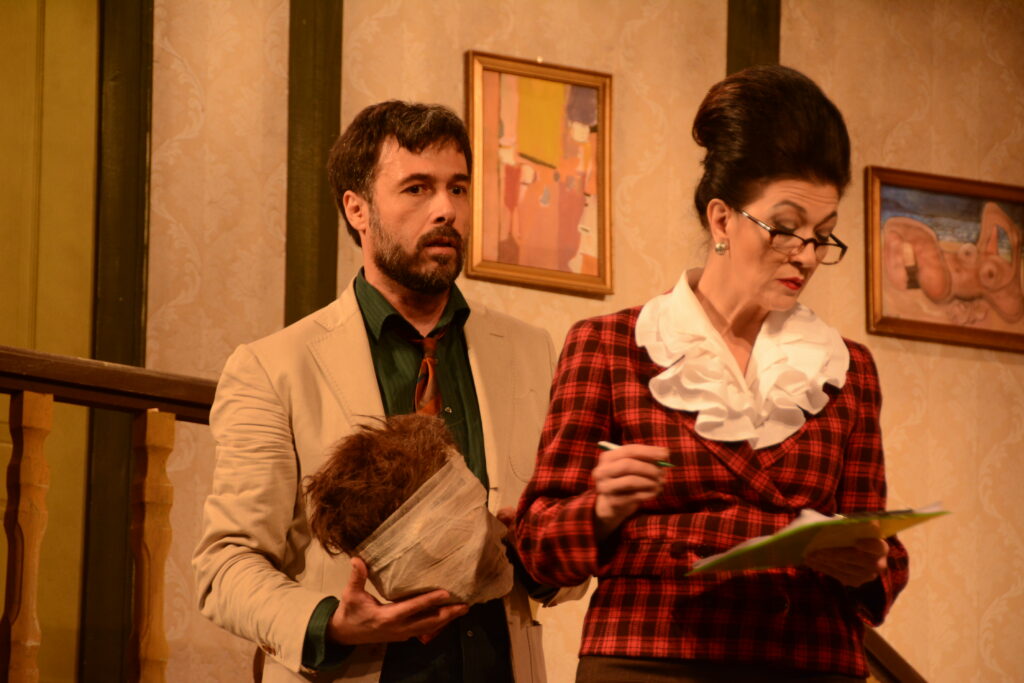 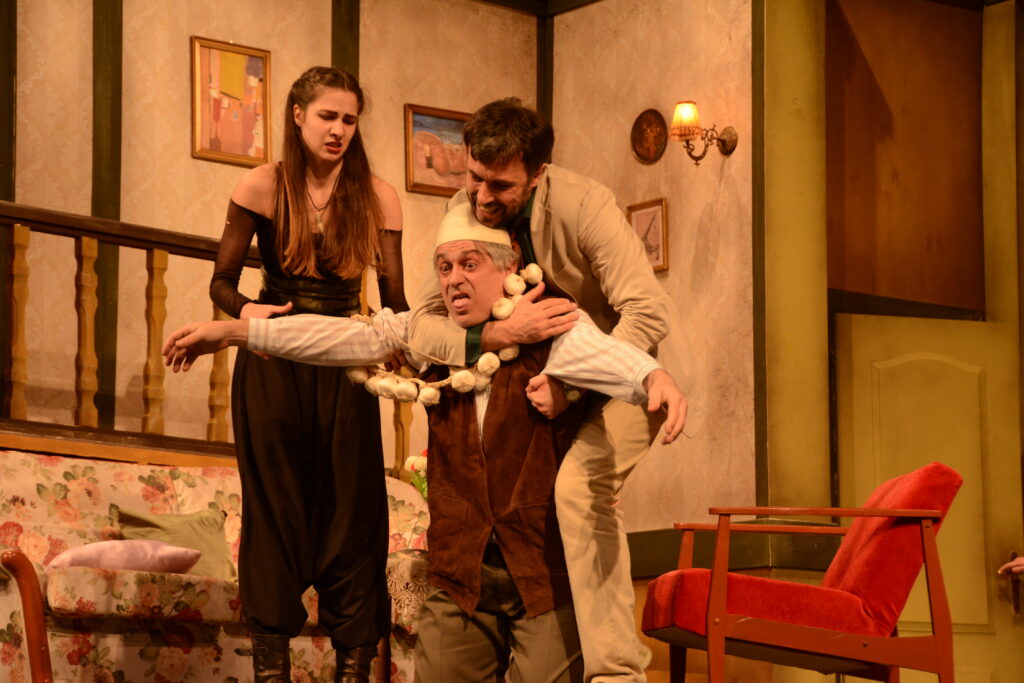 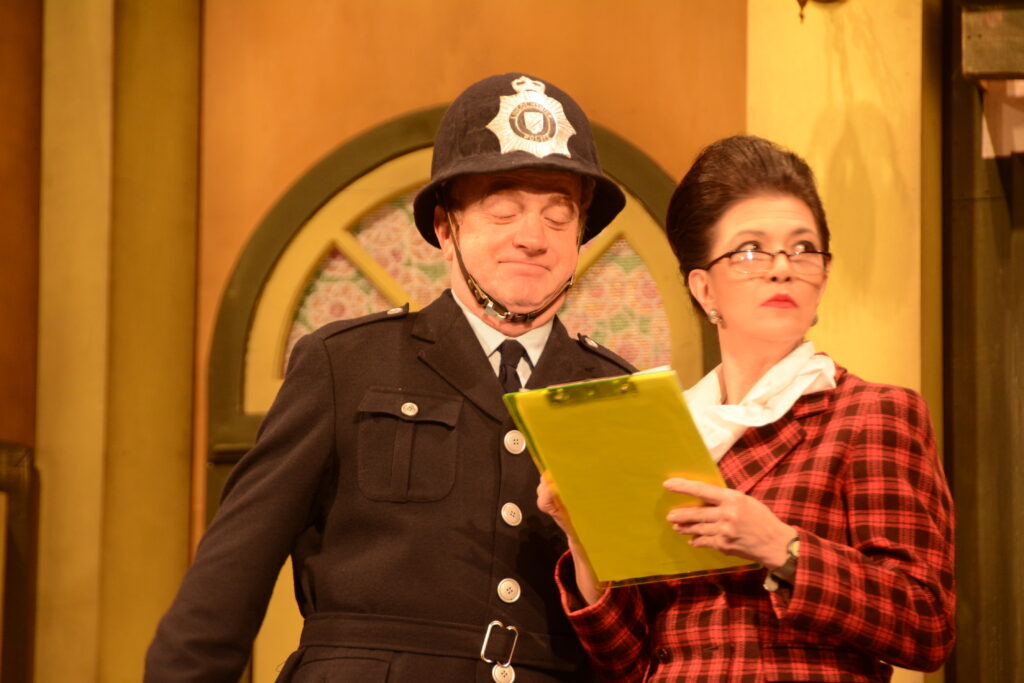 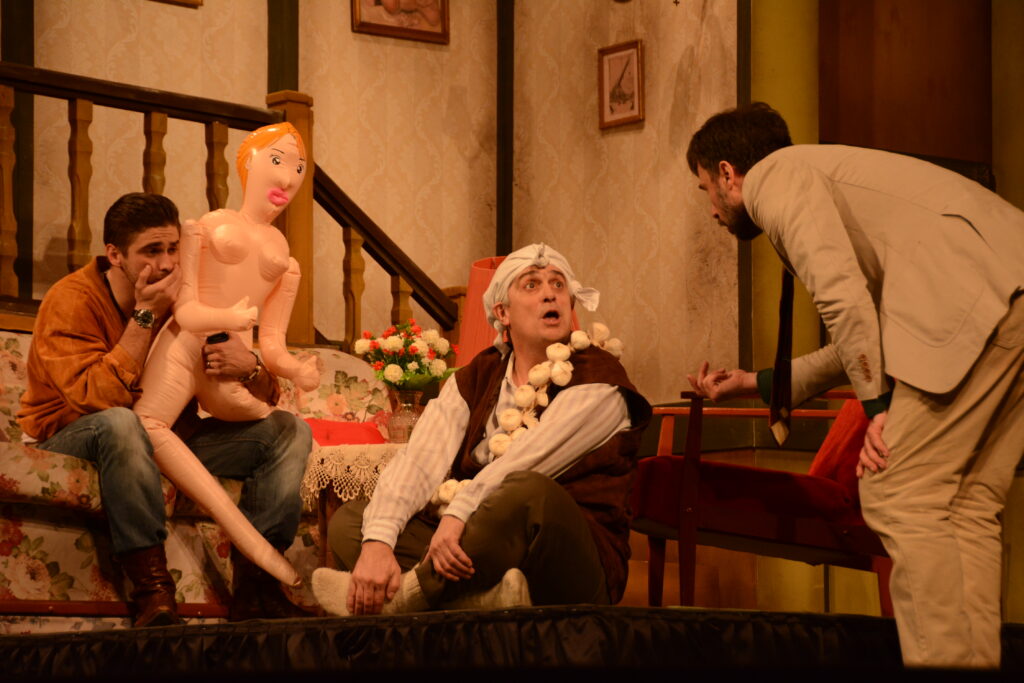 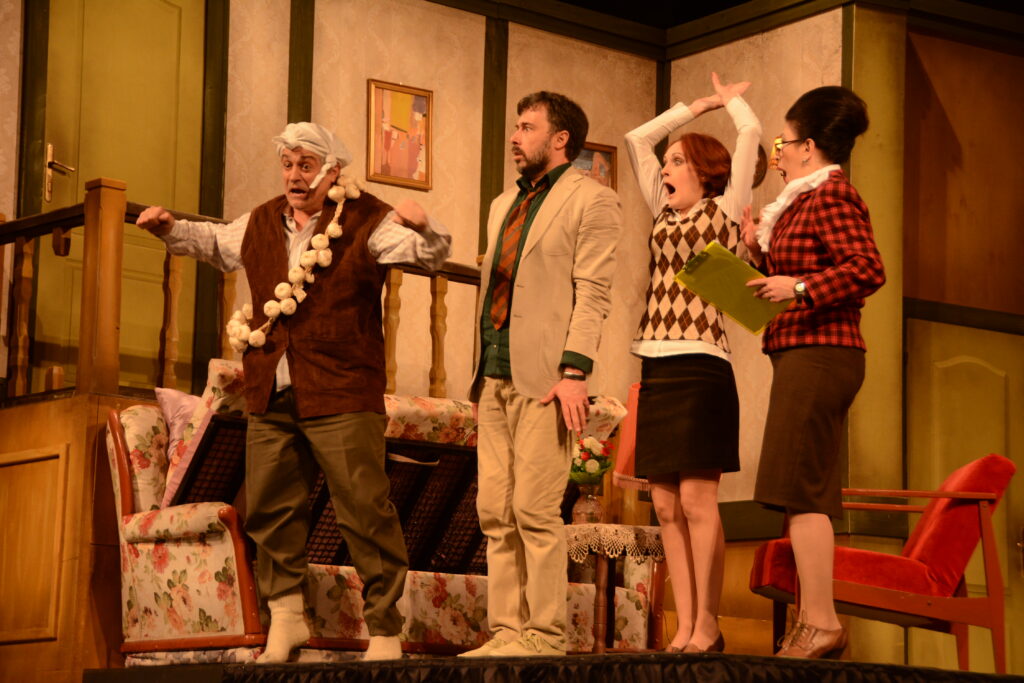 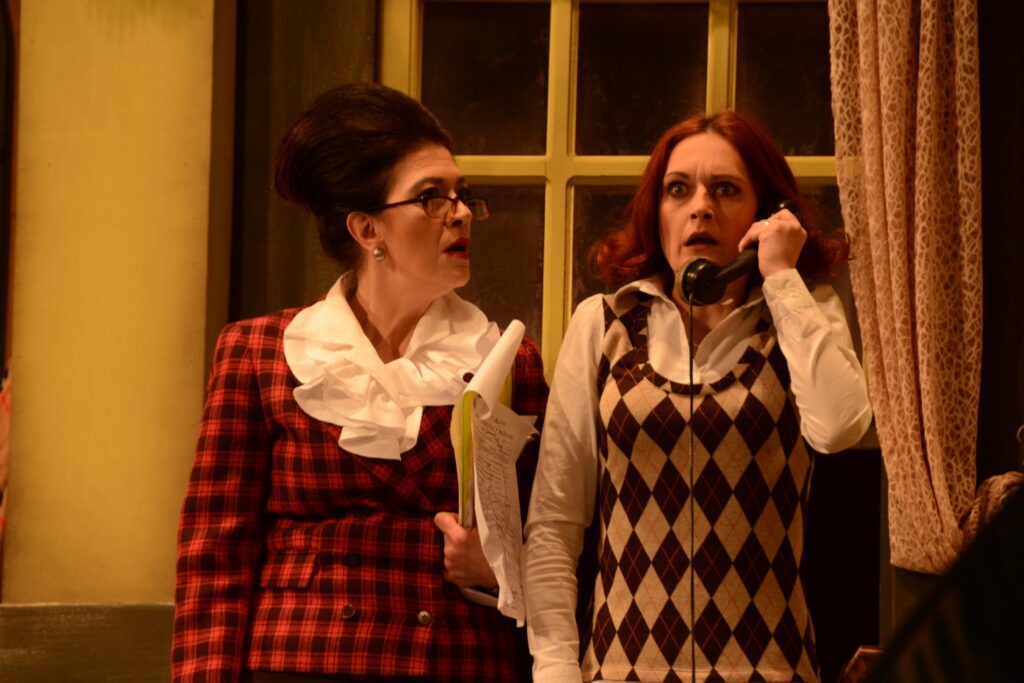 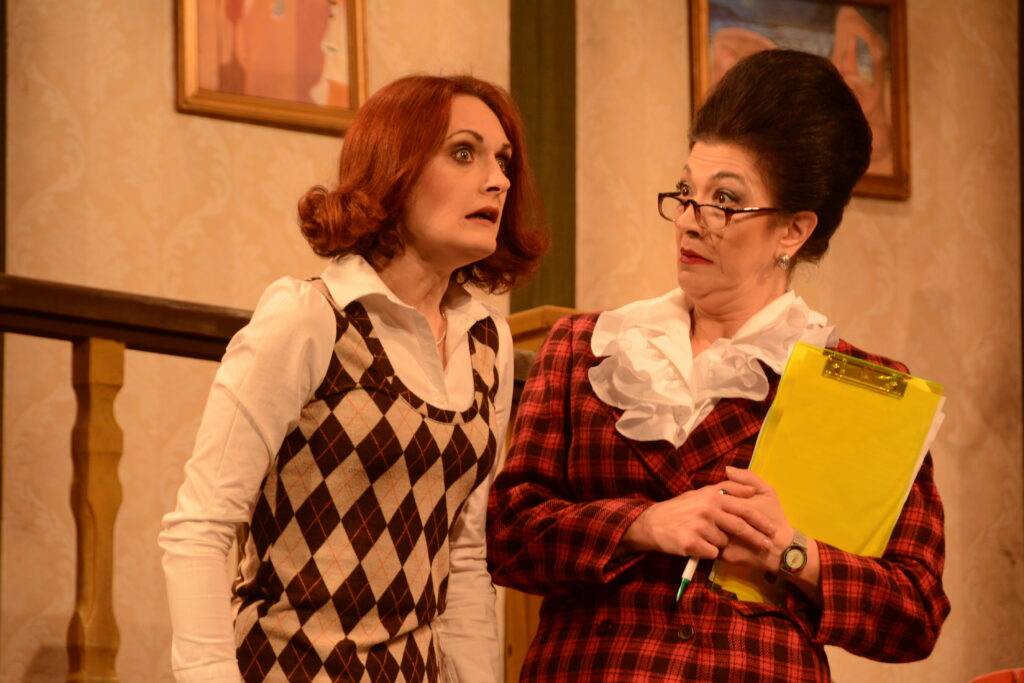 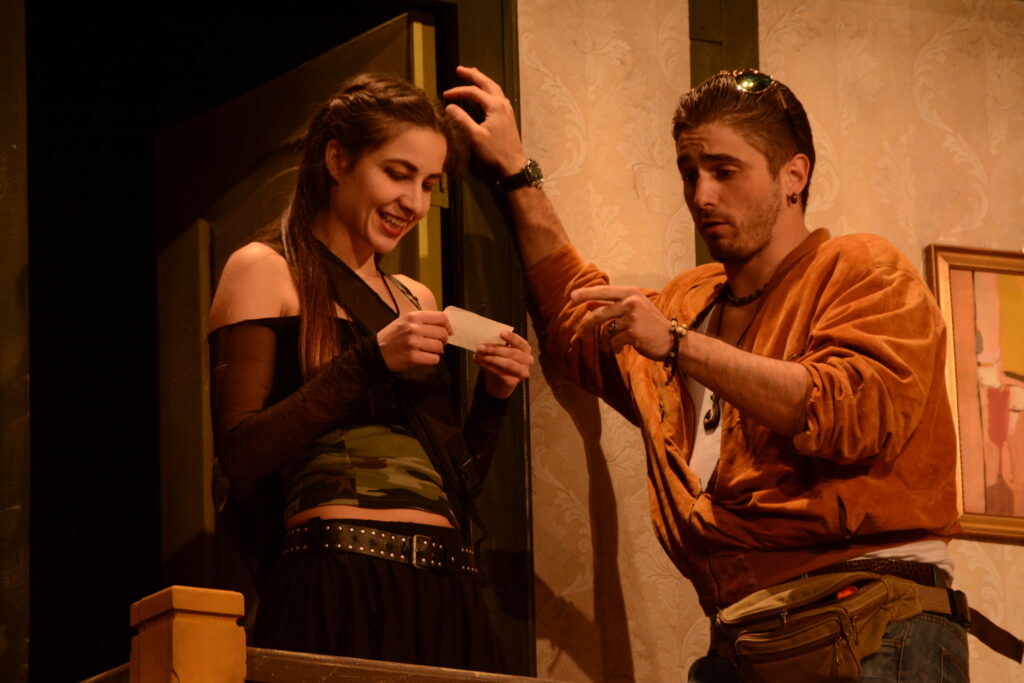